Experience the world as Galileo discovered it. Grind a 2 1/4" lens like Galileo did and build a telescope out of every day materials.

Galileo was responsible for one of the great shifts in our under standing of our universe and this telescope was the new tool that made it possible. While he was not the inventor of it he improved it's magnification and was the first to seriously turn it towards the night sky. His gift was to put his observations in writing with drawings and compare what he saw in his observations of the moon with phenomena observed on earth.  The moon was the same as earth because the shadows progressed with the movement of the sun. Around Jupiter he found these "stars" that circled it and he drew the comparison that if the moons circled Jupiter and if our moon circled the earth then we must circle the Sun. With that he provided the practical validation of Nicolas Copernicus' theory that we and all the other planets revolved around the Sun. This notion rocked the Renaissance world in Europe to the core.

With this telescope you can see the shadows move across the surface of the moon as it grows to the full moon and the again as it wanes. You will also be able to see Jupiter's larger moons which Galileo used to build time tables by timing when they were obscured by Jupiter. He started creating a chart that could be used by knowing the date of the year you could observe Jupiter and tell by the position of Jupiter's moons what time it was. This was the most accurate time piece available then. Particularly during long ocean voyages.

You will have to let go of the gorgeous pictures from the Hubble Telescope and put yourself in Galileo's shoes. You will experience with the grinding of the lens and observing the heavens as he saw them what it was like for him. We might not be able to grind one of the mirrors for one of the large telescopes in use to day or the Hubble but this will give what ever you read about Galileo a whole different meaning.

Using off the shelf plumbing parts the tubing is adapted to hold the eye piece and slide in and out to focus. 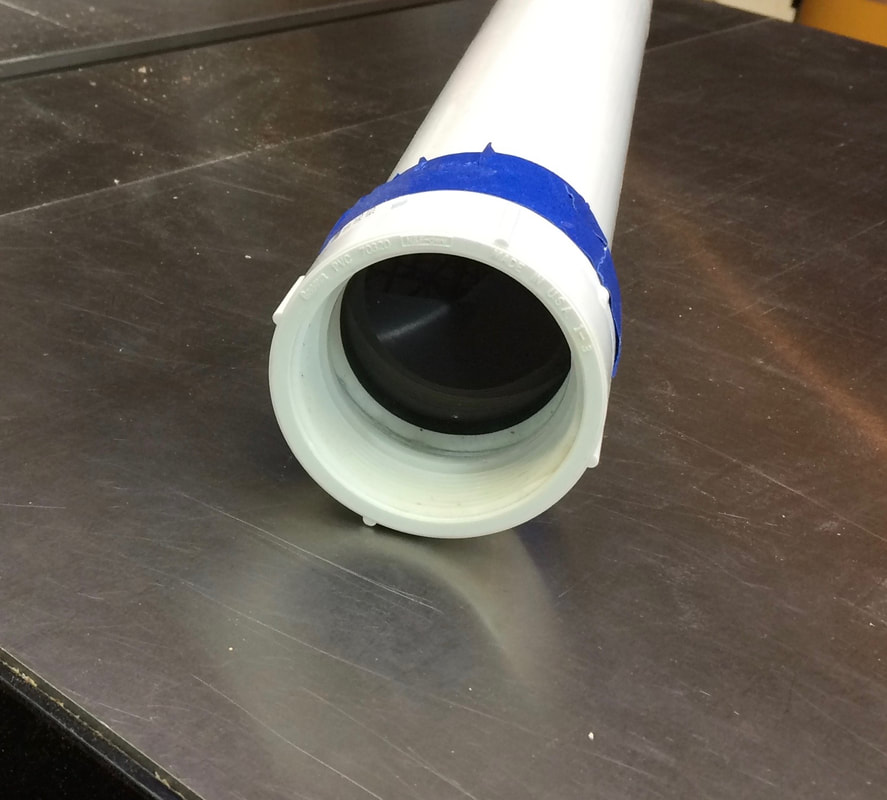 The 2 1/4 inch lens is held in place by the coupling. The masking tape is there to hold the coupling in place so the lens can be removed if necessary.
Back to the Home Page